How the GATT Rate Changes Your Pension Lump Sum 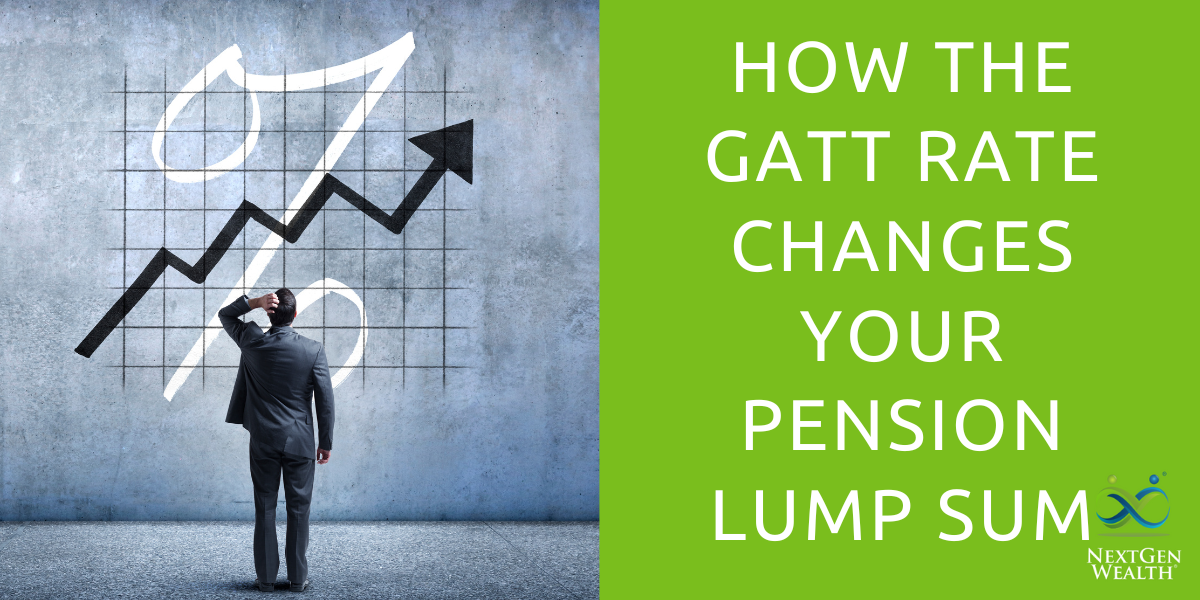 Although defined benefit plans (pension) are less common today, many people will still rely on them for retirement. There are some very specific rules governing how these plans are calculated for payout either over the course of retirement or in a lump sum.

If you have a pension or are expecting to receive one, then you need to be familiar with the role the Federal General Agreement on Tariffs and Trade (GATT) rate has on your benefits. This is particularly important when deciding if you should take a lump sum payout.

The General Agreement on Tariffs and Trade (GATT) was originally an agreement on trade quotas and tariffs after World War II (hence the name). Over the years, the GATT has evolved and influenced policy across the globe. One of those laws changed how pension lump sums are calculated.

What the “GATT Rate” Is

Technically, the term “GATT Rate” is a bit misleading. This refers to a change to the Employee Retirement Income Security Act of 1974 (ERISA) made by the “Uruguay Round Agreements Act” (Public Law 103-465, 103d Congress). There were two key changes relating to lump sum pensions: use of the 30-year Treasury Rate and the Secretary of the Treasury mortality tables.

Previously, pensions used different mortality tables and interest rates. This meant that the assumed life expectancy and rates of return used by pension funds were sometimes very different than the new standard. In other words, it’s a pretty big deal.

For companies using the earlier mortality tables and interest rates, this meant they needed to put a lot more money into their pension plans to ensure they were adequately funded. At the time, many plans were underfunded.

To keep the plans funded, employers needed to put substantially more into their retirement funds. By some estimates, plan costs doubled from 1980 to 1996.

Retiring in Uncertain Times? The 3 "dos" and 2 "don'ts" to retiring amid uncertainty. Download our FREE guide today!

Without getting too far down this math equation, the lower the interest rate assumptions are, the larger the lump sum should be. The opposite is also true. When interest rates are higher, lump sum payments will decrease.

Therefore, if the 30-year treasury rate is low, you’ll get a bigger lump sum. If rates are higher, you’ll get a smaller lump sum. The smaller your lump sum payout is, the harder it is to create the same level of income your pension would have provided.

This can have a significant impact on your decision to take a lump sum or not. 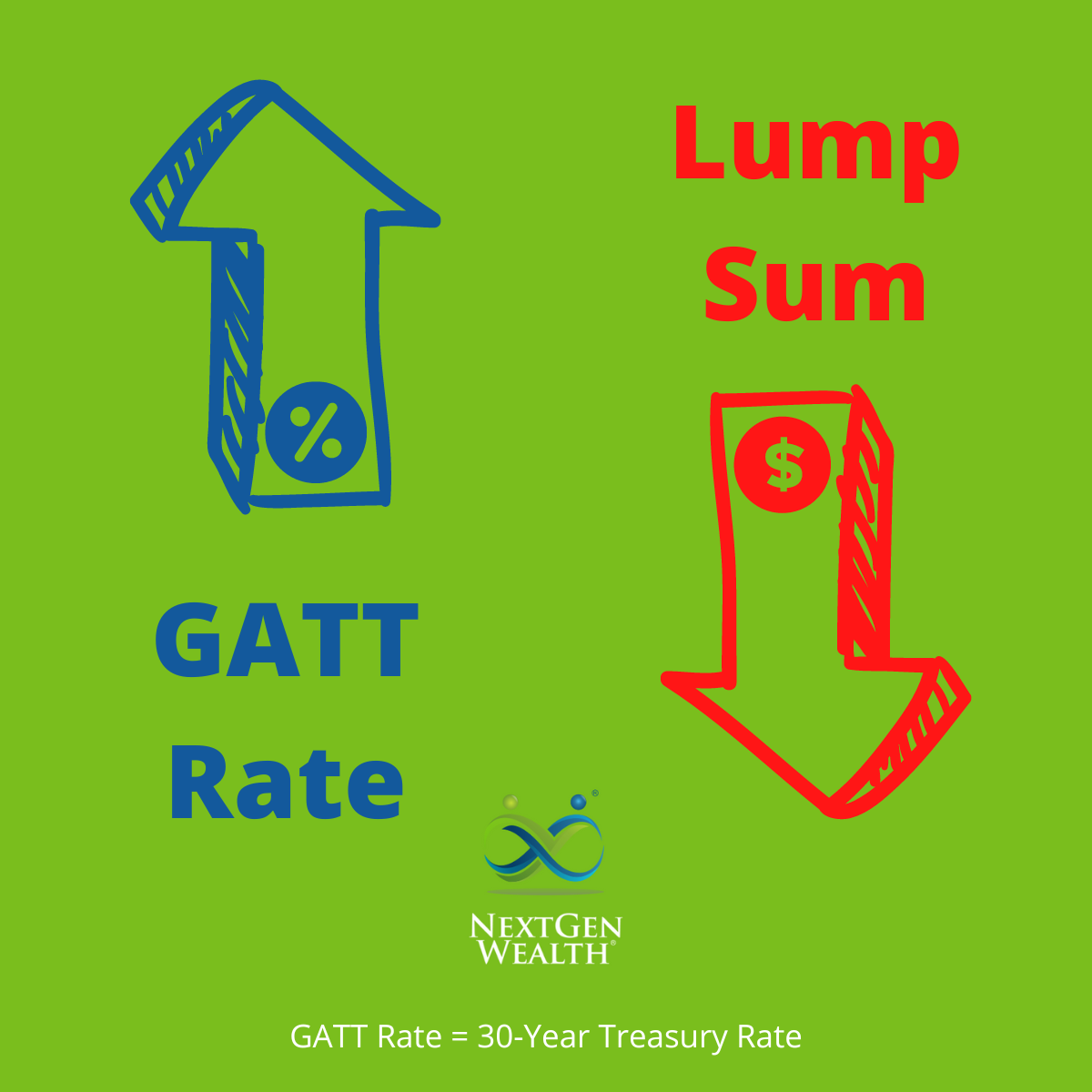 Are you thinking about retiring? Check out the "dos" and "don'ts" to retiring amid uncertainty. Download our FREE guide today!

Risk in Taking a Lump Sum

If you opt for a lump sum distribution, you have to create your own stream of income. Normally this involves building an investment portfolio (stocks, bonds, etc.) or an insurance product such as an annuity. There are other options such as investing in real estate for income as well.

There are risks involved in all of these. Even “safe” investments aren’t bulletproof. In general, the higher expected rate of return, the higher the risk you take on.

Current GATT (30-Year Treasury Rate) and What It Means

The current “GATT Rate” is 3.18% (July 11, 2022). The 30-Year Treasury rate has been rising this year but is still lower than the historical average of 4.79%. This could mean your pension lump sum would be higher than “normal” right now, but vastly lower than it has been over the last few years in our extremely low interest rate environment.

Historical Relevance to Your Lump Sum

The key to look at right now is that pension lump sum calculations will result in higher payment amounts. If you’re nearing retirement, you need to analyze what affect this could have. Keeping track of rising rates is important if you plan to take a lump sum payout.

To better illustrate this, look at the chart below with the 30-Year Treasury Rate in red and the Federal Funds rate in blue. Notice how closely they move together?

What This Means for Your Pension Lump Sum

We can’t predict the future, but the Federal Rate is highly unlikely to be lower than it has been in recent history. The Federal Reserve has committed to fighting inflation by raising interest rates. As inflation continues to rise, we can expect further rate hikes as deemed necessary.

By some estimates, interest rates are not yet high enough to fight inflation. This means that smaller lump sum pension calculations may be on the horizon. We can expect some change with the anticipated interest rate hikes by the end of 2022.

This isn’t a reason to panic, but you need to know the impact on you. Keep in mind that this is only one part of the overall equation. There are many other factors to consider.

We’re currently experiencing a bit of negative market movements. However, not everything is bad. If you can stand the emotional rollercoaster of investing your [theoretically] larger lump sum in the stock market, the current downturn has less weight.

The overwhelming evidence shows the stock market will recover and continue to grow. We don’t know what the future holds, but we can anticipate continued long-term growth.

Retiring? Check out our safeguarding "Dos" & "Don'ts." The simple steps you can take to help safeguard your retirement. Download our FREE guide today!

If the decision whether to take a lump sum in lieu of your pension seems complex – it can be. The GATT Rate (30-Year Treasury Rate) is only one of the factors you want to consider. There are a whole host of other variables in your personal situation.

Given the historically lower 30-Year Treasury rate and the commitment of the Federal Reserve to increase the Federal Rate even more, lump sums may trend lower into the future. If you’ve been putting off making the decision whether to take a lump sum payout instead of regular pension payments, now is the time to get serious. You might be surprised at how your pension lump sum could change.

You’ll want to weigh all the risks and benefits of your decision carefully. Be sure to consult your financial planner or investment adviser and other financial professionals before making this decision.

Note: The chart above was created with the help of the St. Louis Federal Reserve Economic Data (FRED) tool. 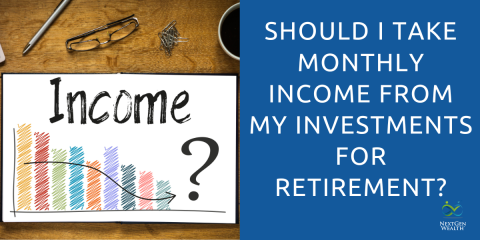 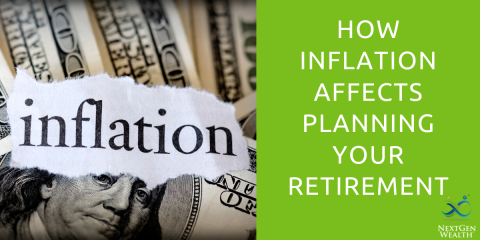 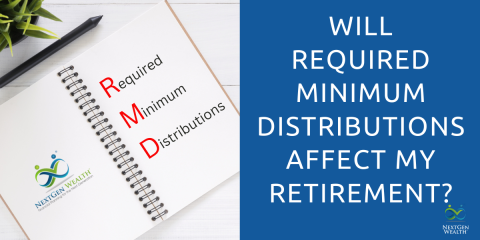