What Is Consumer Sentiment and How Is It Measured?

As our economy seems to be coming out of a dark economic era, it’s important to know what lies ahead. As a consumer, you want to know if you can trust the perception and what appears to be true. Is the economy back on the rise? 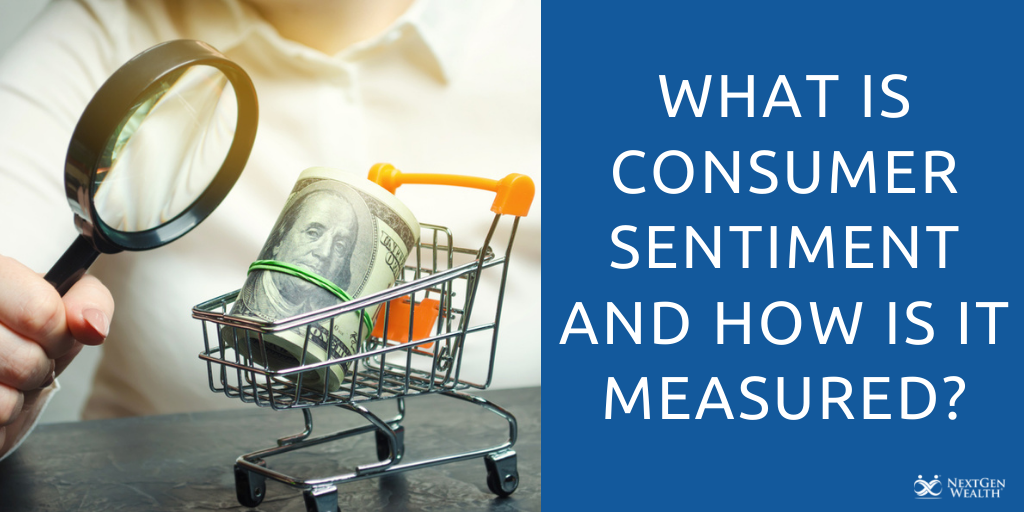 Worried if you're going to have enough income to retire? Learn more here.

What Is Consumer Sentiment?

Consumer sentiment is the overall feeling consumers have about the health of the economy.  This emerged in the mid-20th century and has been widely used as a measurement that influences economic policy.

Consumer spending makes up as much as 70% of the gross domestic product (GDP). When consumers feel good about the economy, they will spend more, and this will boost the economy.

When they don’t feel good about it, they will spend less. When this happens, the economy weakens, and the demand for goods and services follows suit.

This, in turn, impacts other things like business investments, the stock market, and the employment rate. It is, however, impossible to know how consumers feel about spending and the economy without having a way to measure it.

How Is Consumer Sentiment Measured?

There are two instruments used to measure how consumers feel about the economy. These instruments let us know if consumers are planning to spend money in the immediate future.

They are the Consumer Confidence Index (CCI) and the Michigan Consumer Sentiment Index (MCSI). Both of these indexes are conducted monthly.

The Consumer Confidence Index (CCI) is a survey conducted by the Conference Board (a nonprofit business research group) that assesses how consumers are feeling about their finances and the economy. The concept is that if consumers are optimistic, they will spend money, and this stimulates the economy. If they are pessimistic, their lack of spending could lead to a recession.

The CCI is released on the last Tuesday of each month (in the morning hours) and is one of the most credible sources for gauging the status of the economy. It’s a barometer that measures the health of our economy.

What Questions Make Up the Consumer Confidence Index

The CCI is based on the responses of 3,000 to 5,000 (sample size) individuals across all nine U.S. census regions. Initially, the survey was conducted every two months when it started in 1967, but in 1977 it began tracking monthly. The survey consists of only five questions that focus on the present and future economic conditions:

Each response presents a positive, negative, outcome, or neutral outcome. Once the responses from these questions have been gathered, the relative value of each question is calculated and compared against each relative value from 1985, which is the benchmark. This serves as an index value for each question.

The Michigan Consumer Sentiment Index (MCSI) is a survey released every 30 days that assesses how consumers feel about the overall state of the economy and how confident they are about it in the near future.

The telephone survey is conducted by the University of Michigan and is designed to assess the mood of everyday consumers to determine if they’re optimistic, pessimistic, or neutral. This information provides enough to presume consumer spending plans in upcoming months.

The survey is considered an important economic indicator which is why so many people, including policymakers, businesses, and investors, follow it so closely.

Worried that you might run of money in retirement? Learn more here.

What Questions Make Up the Michigan Consumer Sentiment Index

Each month, 500 consumers are given a phone interview that consists of 50 questions. The questions cover personal finances, business conditions, and buying conditions. Some of the questions asked on the survey include:

According to the University of Michigan, over the years, the survey has proven its ability to accurately capture the sentiments of consumers as it relates to interest rates, unemployment, inflation, etc. It has proven to be an accurate indicator of the future of the economy.

Both indices provide a big picture outlook as to how consumers feel about their money and the economy now compared to the past and how they feel about it in the future. The major differences between the Consumer Confidence Index and the Michigan Consumer Sentiment Index are the survey sizes and the questions. Both indices can indicate turning points in spending.

Consumer Sentiment During the Coronavirus Crisis

It’s no news to any of us that the U.S., as well as the entire globe, took a financial hit amidst the pandemic. For weeks at a time, countries were shut down, and everything stopped. Panic struck, and consumers were not able to live as they were accustomed to.

Jobs stopped with very little notice. Life came to a standstill. Businesses took financial blows, and households were left with little recourse in some cases than to stop paying major monthly commitments like mortgage and rent.

Needless to say, consumer sentiment was at an all-time low. There was little money to spend and few places to even spend it with everything shut down. However, things have finally begun moving in a positive direction across most of the globe. While some countries are still suffering from the remnants of the pandemic. The U.S. has, for the most part, opened back up.

Currently, as consumer optimism is getting better, there are signs of discretionary spending. Here are some signs that things are slowly moving toward a better economy.

Looking to ensure you have enough money when you retire to do the things you've always wanted? Learn more here.

Perception is reality. And it’s been proven that how consumers feel about their own personal financial situation and the economy, most likely affects the way the nation as a whole is spending money. Consumer spending influences supply and demand. On an individual basis, our personal finances influence our supply.

Don’t allow another turn of events to dictate your needs from your wants. Be ready for the next critical economic event. NextGen Wealth can help you get the conversation started about how to secure your finances and plan for your financial future. Contact us today!
Tags:
Personal Finance Investments

How To Determine How Much Your Business Is Worth

How to Determine Your Budgeting Category Percentages in Retirement