Saving for retirement is a big deal. The average American will spend nearly a million dollars between the time they retire and their death. Social Security payments won’t cover those expenses, so having savings and investments is essential. 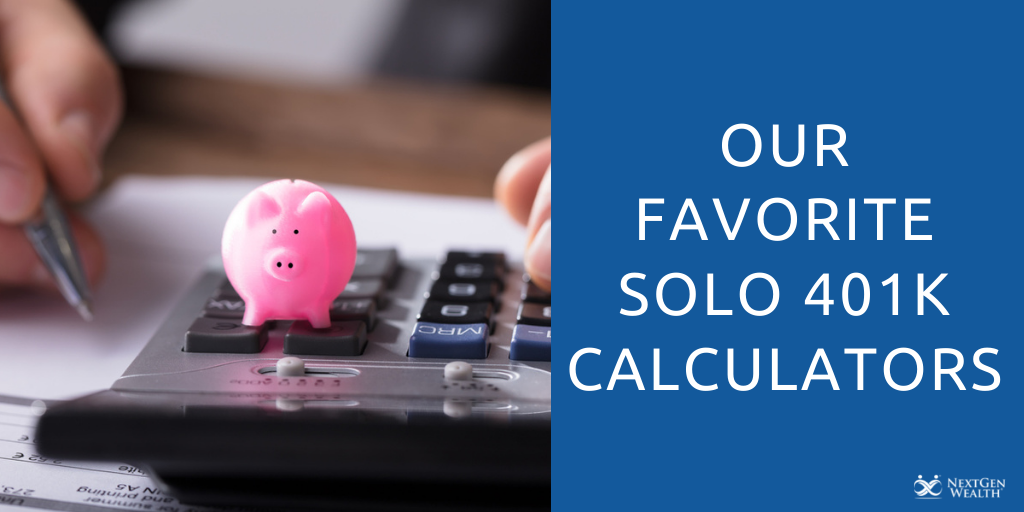 One of the most common retirement plans is the 401(k). It’s a benefit that some jobs offer. You and your employer generally get some sort of tax advantage, which makes it a popular choice.

What happens if you’re self-employed? If you or you and your spouse are the only employees your business has, you may be able to take advantage of what’s known as a solo 401(k).

Calculating the maximum amount you can contribute to your solo 401(k) doesn’t have to be complicated. We’ve put together this list of our favorite 401(k) calculators to help you plan for your future.

Do you know how far $1 million dollars will last in retirement? The answer might surprise you. Check out our infographic to learn more and see if you're on track.

Solo 401(k)s are specifically designed for business owners who don’t have full-time employees other than their spouse.

There are two main types of solo 401(k)s. The first is tax-deferred, the second is a Roth solo 401(k). You can have both if you so choose, but it’s usually best to focus on the one that will save you the most when it comes to taxes.

A tax-deferred solo 401(k) is exactly what its name implies. The money you put into it is automatically deducted from your paycheck before taxes, so you don’t end up paying income tax until it’s withdrawn. At that point, you might be taxed at a lower rate.

This is generally a good option for people making far more money now than they expect to spend in retirement, as that may put you in a lower tax bracket and therefore save you money in the long run.

In a Roth solo 401(k), your money is taxed before it’s deposited. That way, you don’t have to worry about paying taxes on the funds when you withdraw them. Because the money in your 401(k) is invested, the money you earn as your account grows is tax-free.

A potential downside to a Roth solo 401(k) is what’s generally called the five-year rule. To withdraw money from your account without incurring a penalty, you have to wait five years from when you first deposited money into it.

You can also incur early withdrawal fees when taking money out of your account before reaching the age of 59 and a half. Annoyingly, the five-rule rule isn’t waived if you get that age before you hit the five-year mark. You still have to wait.

Are There Other Options?

If you don’t love the sound of a solo 401k, that’s alright. They aren’t the right fit for everyone, particularly if you think you may want to expand your business and hire one or more full-time employees. Fortunately, you have other options in the form of various types of individual retirement accounts (IRAs).

A simplified employee pension IRA (SEP IRA, if you really love acronyms) is one option for self-employed people. These plans are relatively simple to set up and don’t cost much to maintain.

The contribution limit for a SEP IRA is generally much higher than a traditional IRA, which many people find beneficial.

You could also invest in a Roth IRA or a traditional IRA. The two differ in when the money involved is taxed. Like a Roth solo 401(k), Roth IRAs are funded with money that has already been taxed, so your withdrawals are tax-free.

The money you put into a traditional IRA hasn’t been taxed yet, so you’re deferring that payment with the goal of being in a lower tax bracket when you begin withdrawing the money.

Is $1 million enough for you to live your perfect retirement? Maybe, maybe not. Check out our infographic to learn more and see if you're on track.

The main drawback of 401(k)s is that there is an upper limit to the amount of money you can deposit every year. It’s generally higher than the upper limit for an IRA, but if you have the funding to put toward investing for your retirement, it can still be frustrating.

Even worse, the IRS website explaining contribution limits for what they call one participant 401(k) plans reads like a story problem from a math class. It’s headache-inducing, and you have a business to run.

According to the IRS, the general rules for employee contributions are as follows:

Of course, when you’re self-employed, you’re the employer as well as the employee. That’s where things get complicated.

Rather than downloading a PDF of a worksheet from the IRS, I recommend using an online calculator. You’ll save yourself a lot of time and frustration, and you can always double-check the number you get with your financial planner.

AARP’s contribution calculator is free to use and doesn’t require registration or membership. It will ask you to select the type of business you own as well as entering your annual net income and current age.

AARP is a trusted organization, and they make their calculator easy to use. It’s particularly nice that they explain which tax forms to look at to find your net income depending on the type of business you own.

The calculator also lets you compare the maximum contribution you could make to a solo 401(k) to a SEP IRA, a SIMPLE IRA, and a profit-sharing plan.

It should be noted that AARP, along with many other financial planning organizations and businesses, actually links to dinkytown.net’s individual 401(k) contribution comparison calculator.

On the one hand, this is a ringing endorsement of dinkytown.net’s calculators. On the other hand, if you’re browsing the web trying to find a second calculator to confirm the estimated contribution AARP or another organization provided, it might hinder your efforts.

IRA Financial Group’s calculator is also free to use and doesn’t require you to enter your email address. It does ask for your name, but it’s fine just to enter your first name.

The calculator also wants to know the plan year you’re doing calculations for since the cost of living increases in maximum contribution limits could impact your result. Beyond that, it wants to know your business type, age, and income.

From that information, the site generates a PDF report. Its interface is a little dated, and AARP has better graphics, but it does offer a helpful breakdown of the numbers involved.

What is $1 million actually worth in retirement? Not what it used to be. Check out our infographic to learn more and see if you're on track.

Bankrate’s calculator is nearly identical to AARP’s, although it’s last on my list for a reason. We’ll get to that in a second.

The bar chart used to compare maximum potential contributions to a solo 401(k) with contributions to a SEP IRA, SIMPLE IRA, or profit-sharing plan are slightly more aesthetically pleasing than AARP’s, but the overall interface is a bit less usable.

Like AARP’s calculator, it will ask for your business type, net income, and age. It will use that information to generate a report.

Unlike the other two calculators on our list, Bankrate’s calculator wasn’t up to date when I wrote this blog post. It was using 2017 as the plan year, leading to an estimated annual maximum contribution $1,500 lower than it should have been when I ran test numbers through it.

Always check to ensure the online tools you’re using are up to date and providing you with the best information possible.

Planning for the future can be a challenge, particularly where your finances are concerned. You don’t have to go it alone. NextGen Wealth is here to help you navigate the intricacies of planning your investments and retirement.

Contact us today to get your free financial assessment!
Tags:
Retirement Personal Finance 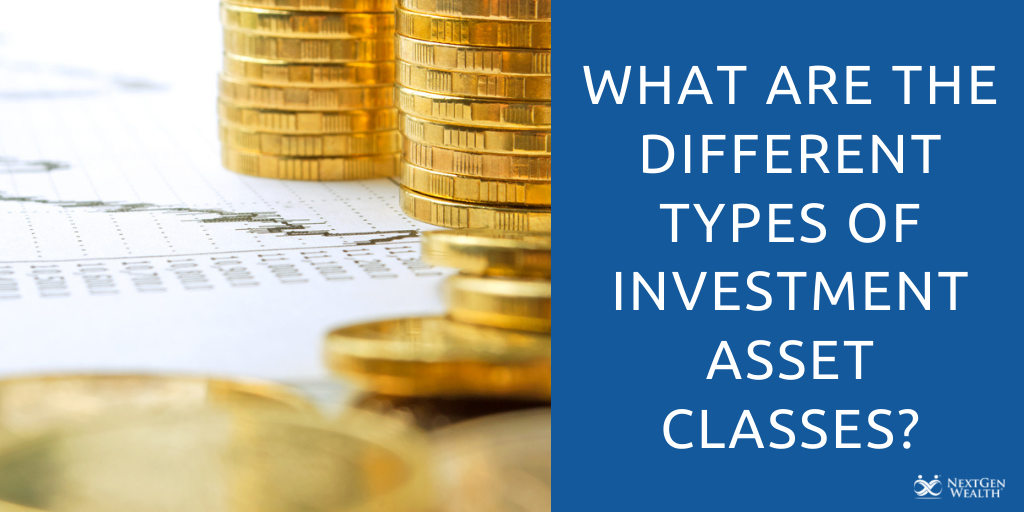 What Are the Different Types of Investment Asset Classes? 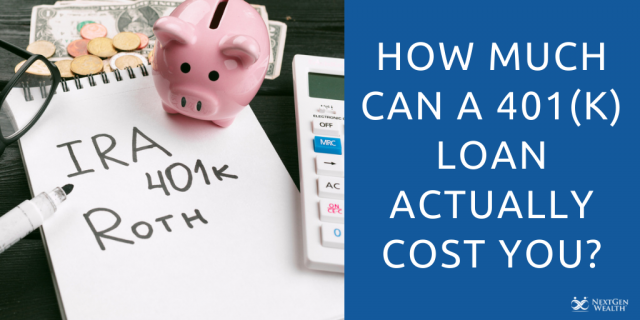