Why Do We Think People Have More Money Than Us?

As the old saying goes, money doesn’t grow on trees. However, if you pay attention to some people’s spending habits or online pictures, it can certainly seem that way for them. These days, it’s never been easier to be jealous of everyone else, particularly if you’re on a tight budget. 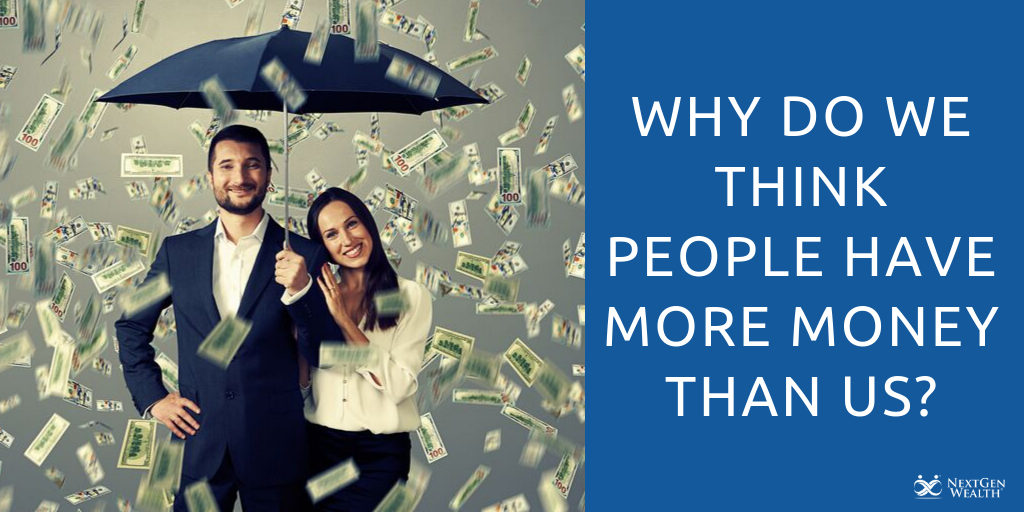 But why do we think people have more money than us? What’s really going on here?

It turns out that there are a few different factors, and none of them are good. Overall, it may seem like you’re wallowing in debt while others are jet-setting around the world, but the fact is that they probably have just as many financial problems as you do.

The Psychology of Financial Comparison

One of the driving factors behind this phenomenon may have to do with the way our brains work. When it comes to finances and what we consider “rich,” we are always aspiring to reach new heights.

According to research, the average person evaluates wealth as being roughly three times one’s current salary. So, if you’re making $40,000 per year, you probably assume that someone making at least $120,000 a year is rich.

But what happens if you suddenly get that high-paying job and reach the goal? Unfortunately, then you’ll move the goal post again, meaning that “rich” is now $360,000 or more.

When you break it down, it’s all about how we adapt to our surroundings. For example, if you’re living in a one-bedroom apartment and suddenly move to a four-bedroom house, do you keep the same amount of belongings? No, you buy more furniture, more decor, and more stuff to fill the empty spaces.

Our brains are naturally designed for this kind of adaptation. Psychologists refer to it as the “hedonic treadmill.” Whether our circumstances are good or bad, we adapt to them until they become the new normal. As we progress financially, we don’t realize how many advantages we have. Instead, we look to those who have more and say, “That’s where I want to be.”

Unfortunately, rising income inequality only exacerbates this issue. If most of your peers are doing about the same or worse than you, it’s easier to recognize how good you have it. However, because wealth is increasing so much faster for those at the top, those closer to the bottom are feeling left behind.

To make matters worse, when you start to understand the mechanics of income inequality, specifically how it relates to your personal earnings, that enhances this effect. Simply put, if you don’t see a raise in your future, or you don’t know how you’re going to get that high-paying job, it’s much easier to fall into a gloom and doom spiral that makes you hyper-aware of anyone else doing better than you.

Another thing to keep in mind is that it’s not just you who acts this way. According to recent research on the ultra-rich, this kind of competitive spirit exists at all income levels. Those who are making millions or billions of dollars still believe that they need twice or three times as much money to be truly happy.

With social media dominating our lives, it’s never been easier (or more lucrative) to show off what you have. With the rise of “influencers” on various platforms, the competition to take well-crafted photos and present the illusion of wealth is only getting fiercer.

However, influencers aren’t the only ones doing this. Everyone is guilty of keeping up appearances, especially on social media. Once you think about it, though, it makes perfect sense. After all, do you want to share your successes with people (i.e., the fancy restaurant you went to or the vacation you took) or your failures (your credit card bills, your car payments)?

For the most part, it’s easy to assume that everyone else has more money than you because you only see the flashy and expensive things. If you look below the surface, you’d see a lot more going on.

Keeping up appearances also happens outside of social media. When you visit someone else’s house, you didn’t see the work that went into cleaning and maintaining it - you only see how immaculate and beautiful everything looks.

As social creatures, we are acutely aware of how others perceive us, which is why so many of us worry about putting our best foot forward. Giving the illusion of wealth and success is far more important than actually achieving it. After all, if people think you’re rich or well off, that’s what really matters, right?

Advertising also reinforces this idea. We are bombarded all the time by ads and marketing campaigns that show us how wealth is the key to happiness. If you buy this expensive watch, TV, or car, you’ll know that you’ve made it to the top.

According to a recent study by Merrill Lynch and Age Wave found that 79 percent of parents are providing financial assistance to their children. This number is the highest it’s ever been in US history, and it shows that more people than you may realize are getting help with money. To put it into dollars, over $500 billion is being transferred from parents to children in the US.

We’re living in an era where parents are investing more heavily in their kids than ever before. There were some other gems from the Merrill Lynch study that illustrate the significance of this trend.

Another interesting tidbit was that most of the money was being given to children who weren’t living at home. More millennials have moved back in with mom and dad (they’re called boomerang kids), but only about 20 percent of that $500 billion goes to them. On average, the kids who aren’t at home get about $7,000 per year to help cover various bills and expenses.

Imagine if you had money coming in from your parents. What if your rent was taken care of, or your utilities were no longer hanging over your head? Where would all of that extra cash go? Chances are you would spend it on that nicer TV or a mini tropical vacation, which you would then share on social media.

Overall, when you consider how many people are still getting financial aid from their parents, it’s easier to understand why it appears that they have more than you. If you were in the same position, your circumstances would also improve.

Finally, another primary reason why it’s easy to believe everyone else has more money than you is because you’re not getting the whole picture. We’ve already discussed how most people try to present the illusion of wealth, but the other side of things is that you’re probably not paying close attention.

In many cases, you may be bundling different items together without realizing it. One of your friends just went to Hawaii, and another friend bought a new car. On TV, you see working-class people drop thousands on a wedding dress, and you hear about someone losing a $10,000 necklace.

Individually, you don’t know what each person is doing to come by these things or the sacrifices that had to be made to get them. Instead, you remember the expensive items or make assumptions about the price (what if that vacation was cheaper than you thought?). Overall, you start bundling these successes together to paint a picture of wealth shared by everyone except you.

So, What Can You Do?

Looking at how well other people are doing is a toxic habit. You start to feel left out, and you want to share in some of the success, regardless of how it will impact your financial situation. Instead, follow these simple tips to change your perspective and see how well you’re really doing.

If you’re spending hours every day looking at meticulously crafted photos, it’s easy to want to be a part of the action. Start tracking how long you spend on social sites and see how much you can cut out. According to research, the average person spends about 142 minutes per day on social sites. Try to cut that down to half and see how you feel afterward.

Start Focusing on Your Budget

When you compare your money to everyone else’s, you worry less about how much you have, focusing more on how you can keep up. Unfortunately, this mentality is dangerous, as it can lead to massive debt if you’re not careful.

An excellent way to keep your head down is to draft a budget. Take a look at the money coming in and the money going out and see where you can make some changes (and cuts). All too often, we don’t take the time to fully understand our personal cash flow, which can put us in a worsening situation. Taking a step back can help you prioritize your money, so you don’t pay attention to what others are doing.

When you think about how other people are living and spending money, what is one thing you wish you could do more? Is it a shopping spree at a fancy retailer? Perhaps a dream vacation? Sit down and really think about what matters to you the most, and what makes you the most jealous of others.

Once you figure that out, set a goal. If you want to buy some expensive jewelry, figure out how much certain pieces cost, and start saving. Same if you want to travel more, or whatever else tickles your fancy.

The benefit of focusing on a specific goal is that it keeps you motivated. Also, it may be easier to make the necessary sacrifices to reach that objective sooner. Instead of eating out four times a week, you start cooking at home more often so you can save the extra cash.

Bottom Line: Focus on Yourself, Not Others

Overall, if you want to stop worrying about how others are spending their money, start paying closer attention to yourself. Focus on what you could be doing to get more satisfaction out of life, and see where it takes you.

Instead of thinking about what you don’t have, put more effort into getting what you can have. Once you see your efforts paying off, it will be easier to forget about everyone else and focus on the satisfaction of achieving your goals.

Want More Great Information Like This Sent To You Monthly?

This is a post from Clint Haynes, a Certified Financial Planner® and Financial Advisor in Kansas City, Missouri. He is also the founder and owner of NextGen Wealth. You can learn more about Clint at the website NextGen Wealth.
Tags:
Life Planning Personal Finance 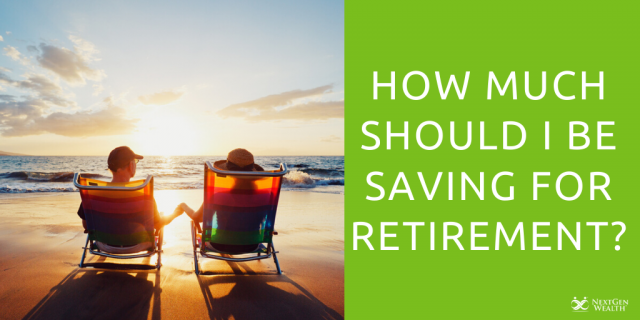 How Much Should I Be Saving for Retirement? 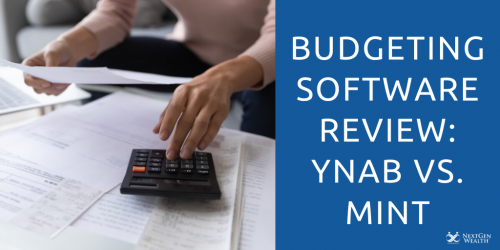 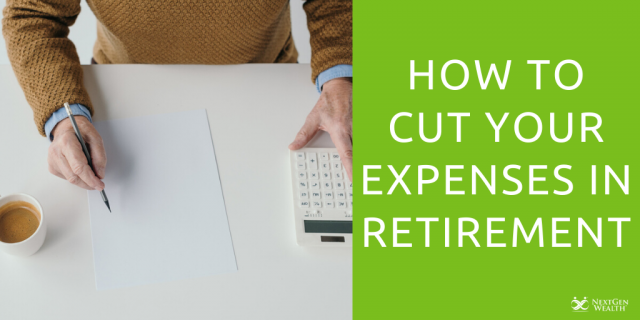 How to Cut Your Expenses in Retirement